What does an Open Source software really mean? 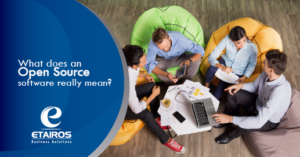 Learn more about a solution that is more than just open source.

Although since 1983 the free software movement emerged, it was not until the late 90s that it had a significant boost with the recognition of Linux in such influential publications as Forbes or the release of the source code of the “Netscape” browser.

On February 3, 1998, a group of experts met in Palo Alto (CA) and in a strategic work session they coined the term “Open Source” instead of the concept that had been used until that moment to make the definition of open code much more precise.

At the end of the same month, the OSI organization was founded by Eric Raymond and Bruce Perens and since then it has focused on faithfully fulfilling its mission of being an educational, defense and management organization for the collaborative development of Software.

One of the first missions of the organization OSI was to write the definition of open code (Open Source Definition – OSD) and use this definition for the creation of a list of approved licenses. This list was published in October 1999 and since then it has been constantly updated with the technological changes that our society has had in this millennium.

When the term Open Source is read, the common people understand it as basically having access to the source code of a software, however, the license terms of distribution of any software, which is said to be open source, must comply with the following criteria to really be considered as Open Source:

At Etairos we offer CRM and EAM solutions based on open source licenses, which allow your organization to have robust software, developed in collaboration by many groups around the world, with very easy access and scalability. The solutions we offer meet the needs of your company and are at the forefront of current technological developments.